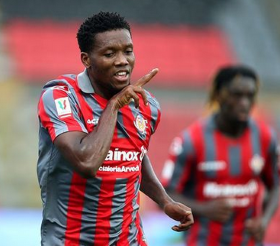 Respected Italian agent Patrick Bastianelli, who used to look after Odion Ighalo during the strikers's spell at Udinese, has highlighted the qualities of US Cremonese star David Okereke and believes that his client would be suited to Napoli's playing style if signed by the Serie A table toppers.

Okereke is a typical Nigerian striker as he is capable of playing as a center forward, left winger and right winger.

The 25-year-old former Club Brugge man is back in Italy after previous spells at Spezia, Cosenza and Venezia, and has done pretty well for Serie A strugglers Cremonese with six goal involvements in twenty outings across all competitions this term.

Bastianelli revealed that Okereke is dreaming of teaming up with his friend Osimhen at Napoli.

Okereke has played together with Osimhen before at international level, the two strikers were drafted to beef up the Nigeria U23 team before a crucial Olympic Games qualifier against Libya in 2019.

"Okereke is very flexible, he can cover multiple roles. He was born as a winger forward, he plays as a first striker, support striker, as an attacking midfielder and has this great characteristic of being able to adapt in multiple forms," Bastianelli was quoted as saying by Tutto Napoli.

"I hope he can complete his career playing in an important team because from a technical and character point of view he has everything to make an important leap in quality.

"I expect Okereke to complete the season in double figures because then whoever plays in attack has to play the numbers.

"His dream is to team up with his friend Osimhen. He could fit in the battery of Napoli forwards. Now he is focused on Cremonese and dreams of salvation"

Osimhen and Okereke could be facing each other tonight in the Coppa Italia meeting between Napoli and Cremonese at the Diego Maradona Stadium.