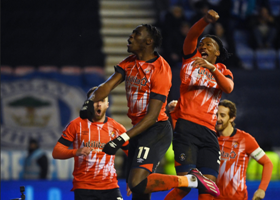 Allnigeriasoccer.com's review of the Nigerian players that found the net for their respective foreign clubs in competitive matches on Tuesday, January 17, 2023.

Luton Town are through to the fourth round of the Emirates FA Cup following a 2-1 win over Kolo Toure's Wigan Athletic at the DW Stadium.

Elijah Adebayo was the hero for the Hatters, scoring a 97th minute winner when he found the bottom corner with a low finish past the goalkeeper - his fourth goal in 25 all-competition appearances this term.

Luton Town will face Grimsby Town in a fourth round tie at Kenilworth Road in Bedfordshire on January 28.

In the Liga Leumit, Lanre Kehinde continued his rich vein of form by bagging a brace for Hapoel Nof HaGalil in their 2-1 win over Ramat haSharon at the Green Stadium (Nazareth Illit).

Kehinde opened the scoring from the penalty spot in the 32nd minute but the scores were level at the break as former Nigeria U23 striker Peter Onyekachi equalized for the visitors.

Five minutes from time, Kehinde netted the game-winning goal from the penalty spot, taking his tally for the season to five goals in seven league appearances.