No going back : Date of arrival of Crystal Palace striker in Flying Eagles camp revealed 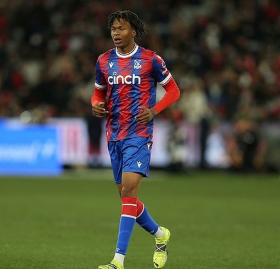 Allnigeriasoccer.com can exclusively report with certainty that officials of the Flying Eagles have received assurances from Ademola Ola-Adebomi that he will report for international duty early next week.

The Crystal Palace striker will hop on a plane bound for Abuja this coming weekend and is expected in the country's capital on Sunday, January 22.

Unlike his development squad teammate, Anglo-Canadian-Nigerian glovesman Owen Goodman, who is playing a game of cat and mouse with the Nigeria Football Federation, there is no going back in Ola-Adebomi's decision to play international football for Nigeria.

It is understood that the prolific left-footed striker has been liaising with Crystal Palace higher-ups to release him to the Nigeria Football Federation for the training camp.

Ola-Adebomi was conspicuously missing from the matchday squad of Crystal Palace in their 2-1 loss to Fulham in a Premier League 2 London derby on Monday, January 16.

The 19-year-old is one of the foreign-based strikers officially invited to beef up the squad, the others being KAA Gent's Ahmed Abdullahi and Arsenal's Joel Ideho.

Ola-Adebomi is highly rated by Crystal Palace's first team coaching staff led by Patrick Vieira and was given minutes in a pre-season friendly against Manchester United in July 2022.