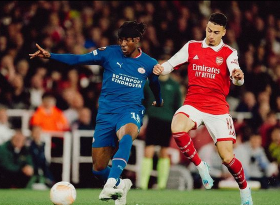 Former Glasgow Rangers manager Dick Advocaat has admitted that he would sell Nonso Madueke for a fee of 45 million euros (approximately N22.5 billion in Nigerian currency) if he were one of the decision makers at PSV Eindhoven.

English Premier League club Chelsea have been heavily linked with a move for the Tottenham Hotspur-reared winger, but their initial bid of 30 million euros was deemed insufficient by PSV.

The Blues have not yet made a follow-up offer for the signature of the 20-year-old and it is likely things have gone quiet in recent days because they were prioritizing the signing of Mykhaylo Mudryk.

Madueke went the full ninety for PSV in their most recent game against Fortuna Sittard despite speculation surrounding his future.

Advocaat pointed out that the England U21 international of Nigerian descent, who missed the first two months of the current season due to injury, wasn't at his best against Fortuna Sittard, and urged PSV to do away with his services.

"Surely there are better players than Madueke? For 45 million I would certainly get rid of him. Tie him and let it go, yes," Advocaat said on Dutch television program Veronica Offside, via psvinside.

"He's a good player, but I found him really annoying against Fortuna. He wanted too much.

"They will have more players on the scouting list."

Madueke has played nonstop at PSV Eindhoven since the summer of 2018 and has 20g/14a in eighty appearances across all competitions for the Dutch giants since making his professional debut.