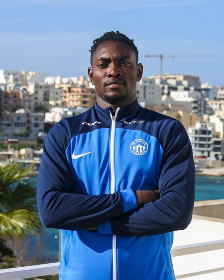 On his curriculum vitae, he lists Inter Bratislava, Podbrezova, SV Mattersburg and Alki Oroklini among his previous clubs.

Speaking on the signing of Olatunjii, manager Luboš Kozel said to Slovan Liberec's official webpage : "Typologically, this is a striker who is tall, strong in the air and in tackles. We do not have such a player in the team.

"Maybe Michael Rabušic is slightly similar to him. We needed a striker after the departure of Mick van Buren and when Max Talovjerov left us, we also needed a player applicable to standard situations.

"He is a young player, so very promising for his age. We were interested in Victor already in the summer, but Larnaca did not let him go because they were playing in the Europa League group.

"When the opportunity arose to get him in this transfer window, we reached for him."

Olatunjji could make his debut for Slovan Liberec in Thursday's TipSport Malta Cup clash against Zlin.