Official : Arsenal loan out 2023 Flying Eagles invitee for the next six months 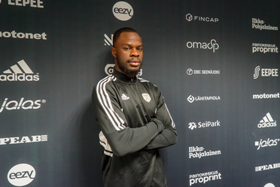 Premier League table toppers Arsenal and Finnish Veikkausliiga side Seinäjoen Jalkapallokerho have both confirmed that promising Nigerian goalkeeper Ovie Ejeheri has been loaned for the second time this season.

The 2023 Flying Eagles invitee will spend the next six months at SJK Seinajoki, the Finnish topflight club confirmed, adding that he will return to England in the summer when Arsenal start preparing for the 2023-2024 Premier League season.

Ejeheri spent the first half of the campaign at Chelmsford City, where he made 25 appearances in all competitions for the National League South side.

The 19-year-old kept twelve clean sheets while conceding fourteen goals during his time with the Clarets - a form that earned him a call-up to Nigeria's U20 national team ahead of the upcoming Africa Cup of Nations in Egypt.

Speaking after the deal was confirmed, Ejeheri said to SJK Seinajoki's official website : "Basically, I just want to be the best possible goalkeeper that I can be. But my dream is to play in the Champions League and win the World Cup gold.

"So, in that sense, my goals are indeed high in terms of what I want to achieve as a soccer player. However, I'm not someone who just talks more about things, I prefer to show my skills on the field."

Ejeheri will start training with his new SJK Seinajoki teammates immediately and is eligible to represent the club in the Liigacup starting at the end of January.