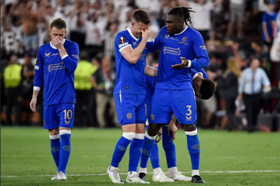 Calvin Bassey is set to feature in his first De Klassieker between Feyenoord and Ajax Amsterdam on Sunday but the central defender is not unfamiliar with playing highly charged games.

As a Rangers player, the Nigeria international was involved in the Old Firm between Celtic and Rangers, so knows the importance of these matches between two great rivals.

Bassey is aware that the Feyenoord and Ajax match at De Kuip is similar to the Old Firm and it's going to be a hostile atmosphere.

Heading into the game, Ajax have little room for error as the race for the Eredivisie title intensifies with five points separating them from table-topping Feyenoord.

Bassey has spoken to his Ajax teammates, former Premier League stars Steven Berghuis and Dušan Tadić, on the upcoming Classic.

"The atmosphere, the tension, the buildup is unbelievable. Games like the Old Firm the first ten to fifteen minutes is not about tactics or this and that, it's about who is ready to give a 100 percent for the badge and ready to fight, " Bassey said to Ajax TV.

"When you're playing in it, it's like I can control a little bit of what can happen so let me try and control my part and give a 100 percent. You go into the games and give a 110 percent.

"Most players like playing in the big games because of the atmosphere, both fans, the intensity of the game and the liveliness of the game."

In his two seasons at Rangers, Bassey played four Old Firms, winning one, drawing one and losing two, and when asked about his favorite Old Firm derby, he didn't have to think very long before he replied.

"It has got to be the one in Hampden, it was the Scottish Cup semifinals, and we had Celtic. It was 1-1 and then it went to extra time, then 118th minute I did an overlap, Ryan Kent was on the ball, played me through, I crossed it in, deflected and went in.

"I remember there was a billboard in front of me, I just jumped over the billboard and ran into the crowd. I got a yellow card for getting the fans a bit too excited but I didn't care.

"It was like the 118th minute, we had just got the winner and it was unbelievable. It was a nice feeling, that was probably my most memorable Old Firm."

On the international stage, Bassey has also featured in heated derbies having played in two games in the so-called Jollof derby between Nigeria and Ghana last year.