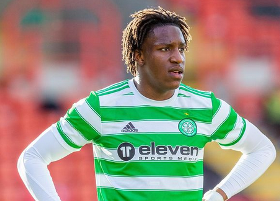 Wearing the number 50 at the back of his jersey, the Super Eagles-eligible central defender stepped out onto the Celtic Park turf as a replacement for Carl Starfelt with three minutes left on the clock.

Lawal's first team debut for the Hoops was inevitable after his impressive performances for Celtic's reserve team.

The 19-year-old was a reserve option for Celtic in their Premiership matches against Aberdeen and St. Johnstone after the 2022 World Cup break but was not utilized off the bench by manager Ange Postecoglou.

He is often invited to train with Celtic's first team and was handed minutes by the Australian football tactician in a friendly against A-League side Sydney FC two months ago.

Lawal joined Celtic in the summer of 2021 after rejecting a professional contract at Watford, where he was named the Academy Player of the Year in his final season at Vicarage Road.

Celtic are into the fifth round of the Scottish Cup after a 5-0 rout of Greenock Morton, courtesy of goals from Aaron Mooy (2), David Turnbull and Kyogo (2)