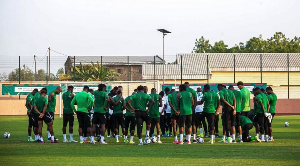 Former Nigeria international, Ifeanyi Udeze has expressed his opinion on why the preparations for the CAF U-20 Africa Cup of Nations in Egypt and that of the Golden Eaglets for the U-17 version of the AFCON in Algeria are slow.

The youth teams have not been able to accelerate their preparations with the Flying Eagles expected to have a pre tournament camp abroad.

Speaking on Brila FM, Lagos Monday morning on why teams like the Flying Eagles don't usually get their plans in place, Udeze, who is the sports radio station's in-house analyst alongside former Super Eagles teammate, Julius Aghahowa, said:

"Their preparations, as well as that of the Golden Eaglets for tournaments are slow because they are not the Super Eagles.

"Yes, as simple as that. The youth teams usually face obstacles like approval from the Federation in terms of commencement of camping, finances and all that.

"What I want to see is Ladan Bosso showing us that he is a good coach. He had to get good players for the U-20 Nations Cup," Udeze reiterated.

The Flying Eagles will be aiming to qualify for the FIFA U-20 World Cup in Indonesia.

Nigeria are seven-time winners of the tournament previously called the African Youth Championship.