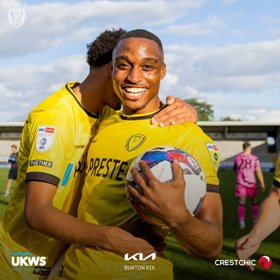 Football Insider says Bolton Wanderers and Millwall are readying bids for the Burton Albion striker but Wigan Athletic are currently in the driving seat for his services.

Adeboyejo is having a banner season at Burton Albion, scoring thirteen goals and providing two assists in 34 appearances across all competitions, and that form has alerted clubs to his potential.

Millwall and Bolton Wanderers are in the market for offensive reinforcements following the sale of two Nigerian attack-minded players Isaac Olaofe and Dapo Afolayan respectively.

Wigan Athletic and Burton Albion are still thrashing out terms over a deal for the 25-year-old.

Adeboyejo spent the formative years of his career with the youth teams of Arsenal, AFC Wimbledon, Charlton Athletic and Leyton Orient.

He took in loan spells at  Royston Town, Hemel Hempstead Town,  Heybridge Swifts, Dulwich Hamlet, Soham Town Rangers and Margate during his time with Leyton Orient, before a permanent transfer to Barnsley, where he spent five years.