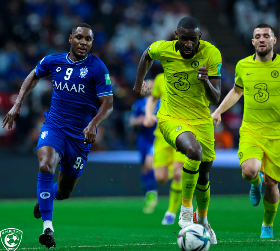 Since Cristiano Ronaldo's move to Al Nassr on a free transfer from Manchester United in the new year, the media has been awash with the news of Al - Hilal tempting Messi to join the Saudi Pro League with a whopping annual salary of $300 million to overtake Ronaldo as highest paid sportsman on earth.

Messi's contract with Paris Saint-Germain is expected to expire in June and there are reports making the rounds that the Saudi Arabian reigning league champions are monitoring the situation in France with keen interest, following his delay to put pen to paper on a new deal.

Reacting to Messi's rumoured move to team up with him at Al - Hilal, Ighalo admitted he can't wait to play with the PSG superstar if the reported deal eventually becomes a reality.

"Of course, Messi is welcome here. I hope very soon it becomes a reality," Ighalo said during an exclusive telephone chat  with allnigeriasoccer.com from his Saudi Arabia base.

"It's the beautiful dream of every player in the world to play with Messi. He is one of the best on planet. If it happens to see the light of day, it would be a great honour and wonderful opportunity to grace the same pitch with such an amazing legend.

"He is a special player with special qualities. His presence will make me a better player and score many more goals for Al - Hilal, he will help us win more trophies and develop the game in this country.

"It will be a fantastic feeling and I am really looking forward to playing next to him. Let's wait and see how it goes."

The 2019 Africa Cup of Nations Golden Boot winner has been in fine form this term thus attracting interest from Spanish La Liga and French Ligue 1 clubs ahead of the summer transfer window and could be making a return to European football once again.

He last played for a European team when he joined Manchester United on loan for the second half of the 2019-2020 season and the deal was extended until January 2021.

Ighalo arrived Al - Hilal from domestic rivals, Al Shabab  in January, 2022 for a fee in the region of 5.9 million euros and his one-and-a-half year contract with the club ends June 30, 2023.

Despite the constant speculation over his future and apparent interest from the European clubs, the Super Eagles  striker says he is happy in Saudi Arabia.

"What you hear is all about transfer speculation. It's normal. But so far so good, I am enjoying my career with Al - Hilal.

"The fans have been so wonderful and supportive hence they deserve to be rewarded. We will cross the bridge when we get to it. For now, I am happy here. I want to focus with my club and achieve my goals, " he summed up.

Ighalo, 33, is on course to enjoy his best season since joining Al - Hilal, netting 8 league goals from 12 matches and one assist in this season's campaign to keep their title defence on track.