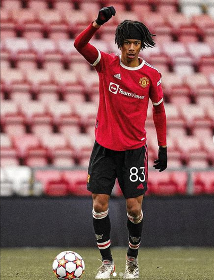 Flying Eagles-eligible player, Maximillian Oyedele on Tuesday night made his senior debut for National League outfit, Altrincham, following his loan move from Manchester United, in their 1-0 defeat to Chesterfield.

The player who can be deployed in defensive midfield and centre back positions, came off the bench in the 73rd minute in place of Jordan Hulme at the Technique Stadium.

Ashley Palmer headed home the ball from a corner kick with two minutes left on the clock which was the decisive moment.

On the opposing side was another young player of Nigerian descent, Tim Akinola, who is on loan from Arsenal.

Akinola also started from the substitute bench and was introduced in the second half for Dobra in the 89th minute.

Oyedele made the substitute bench last week when his current on-loan side won 3-2 against Maidenhead Utd but he was not able to come off the bench for his first game for the Robins.