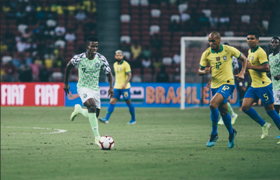 Allnigeriasoccer.com can exclusively report with certainty that Super Eagles midfielder Ramon Azeez is currently in northeastern European country Lithuania as he intensifies his search for a new club.

The 2009 FIFA U17 World Cup Bronze Ball winner has been unemployed for nineteen months, following his departure from Granada in Spain.

Azeez has been training with ten-time Lithuanian champions FK Žalgiris for about a week with a view to a transfer.

And he could be following in the footsteps of his former teammate in the Golden Eaglets class of 2009, Eddy Onazi, who briefly played for FK Žalgiris in 2021 and represented them in the qualifying rounds of the Champions League and Europa League.

Azeez has a rich curriculum vitae, having made 71 appearances in the Spanish La Liga for UD Almeria and Granada, and played over one hundred matches in LaLiga 2.

On the international stage, he was a member of the Super Eagles squad to the 2014 World Cup, where he started in the goalless draw with Iran, and captained the Flying Eagles at the 2011 World Cup.

A product of the Future Pro Academy, Azeez has also represented CD Lugo and Cartagena apart from the aforementioned clubs.