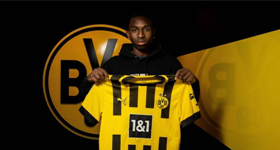 With a statement on their official website, German Bundesliga powerhouse Borussia Dortmund have announced the capture of Nigerian-born striker Moses Otuali for their U23 team.

The transfer of Otuali to Borussia Dortmund was not supposed to be finalized until the summer but the Black and Yellows have brought it forward following the transfer of Moritz Broschinski to VfL Bochum this week.

The center forward has put pen to paper on a two-and-a-half-year deal that will keep him at Dortmund until at least June 30, 2025.

He played for the youth teams of  Eimsbütteler TV, Nettelnburg, Erzgebirge Aue and VfL Wolfsburg, before joining the reserve team of Hamburg in July 2021.

Speaking on the signing of the Nigerian, Ingo Preuss, the sporting director of the U23s, said : "We didn't actually want to sign Moses until the summer and and are all the more delighted that the move has worked out now given the departure of Moritz Broschinski to VfL Bochum.

"Moses will help us straightaway with his goal threat and speed."

Borussia Dortmund U23s are sixteenth in the third tier of German football with eighteen points from nineteen matches.