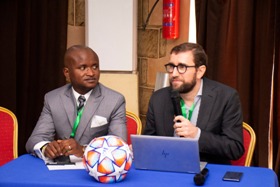 Sandralia Hotel, Solomon Lar Way, Jabi, Abuja was a beehive of activities as football agents across the African continent converged on the Federal Capital Territory to discuss the way forward for football agents and partnering stakeholders.

He also gave insights into the effects of the new FIFA Regulations that now sanctioned Football Agents who are expected to take exams and be licensed directly by FIFA bi-annually  replacing the current intermediary registered at Member Association level.

The licensed intermediary also made recommendations during the two day African Football Agents Conference which is meant to chart a new course for football business in Africa,