Exclusive - Agent: Clubs In Europe And Asia After SHOLA SHODIYA 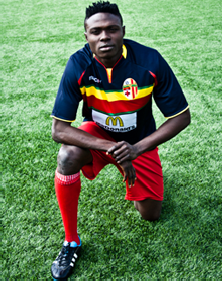 Despite interest from outside Malta, former Nigeria B international Shola Shodaya is likely to remain with Maltese Premier League club Birkirkara, England FA licensed agent Edward Afolabi, who manages the striker, has hinted to allnigeriasoccer.com.

Shodiya, 20, impressed especially at the later stages of this past campaign, netting four goals in his last ten games in the championship.

''Shola Shodiya has a two-year contract with an option for another year with Birkirkara. Three European clubs and a team from Asia have contacted me concerning his availability but Birkirkara FC are not interested in listening to offers for him especially because he is their best player and they are looking to do very well at the UEFA Europa League starting in July.

''He signed a very lucrative contract, unusual in Malta, and he seemed settled. Unless a very tempting offer and package is made, I think he will still be there next season,'' says Edward Afolabi to allnigeriasoccer.com.