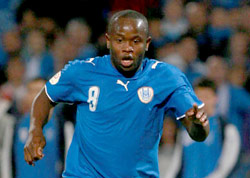 Hapoel Tel Aviv have qualified for next season's Europa League after playing out a 1-1 draw with Maccaba Haifa on Saturday evening at the Kiryat Eli'ezer Stadium, Haifa.

The result meant the Reds with two Nigerians, Nosa Igiebor and Toto Tamuz, on their payroll finished the season in second place with 59 points, level with Dele Aiyenugba's Bnei Yehuda, but with a superior goals difference.

This is the third time in four years Hapoel are finishing the season as vice-champions. Hapoel and Maccabi meet again on Tuesday in the final of the State Cup.