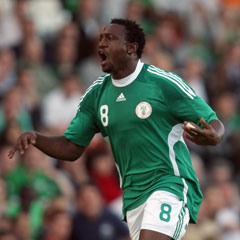 Trabzonspor have started preparations for the 2012 - 2013 season. Turkish website haberform.com says the club are looking for offensive reinforcements, and have set their sights on the Nigerian striker Michael Eneramo.

Eneramo has proved his credentials in Turkey, netting 15 goals in 34 matches (33 starts) for Sivasspor in the just concluded season.

It is being reported that the former Esperance forward has reached a preliminary agreement with an unnamed club in France.

Trabzonspor could be Eneramo's second option if his proposed transition to France fails to see the light of day.