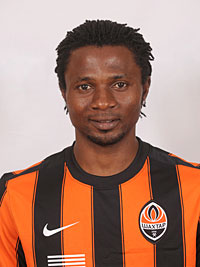 Ukrainian champions Shakhtar Donetsk will be without the services of former Nigeria golden boy Julius Aghahowa for next season reports UA-football.com.

The Director-General of Shakhtar Donetsk,Sergei Palkin revealed the information on his Facebook page when queried by a supporter of the Miners.

Palkin answered: ''The contract with Julius ends in June of this year, after which player will be a free agent,''

Aghahowa joined Shakhtar Donetsk in 2000, but  from 2007- 2009 played for Wigan and Kayserispor, Turkey.  The 30-year-old forward did not play an official game this season.