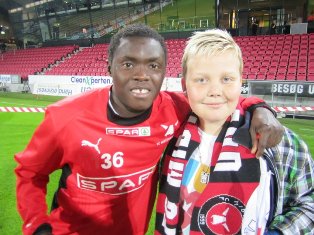 Players and officials of FC Midtjylland have chosen the Nigerian combative midfielder Izunna Uzochukwu as the club's Player of the Year for the 2011 - 2012 season informs top Danish football website bold.dk.

Teammate and dribbling sensation Rilwan Hassan was also recognized by his peers and club officials as the Young Player of the Year.

In an interview with Danish media, Coach of FCM, Glen Riddersholm, has acknowledged the importance of Izunna to his squad.

''Player of the Year was between Izunna and Jakob Poulsen. It was Izunna for several reasons. He is in our eyes the best '6'' (defensive midfielder, ed) in Super League. A skilful combative player who has great importance to us.  He takes great responsibility in the games, says Glen Riddersholm to aoh.dk.

Allnigeriasoccer.com recognized the growing profile of Izunna Uzochukwu, including the 22-year-old in the latest edition of Nigeria's Top 50 youngsters.