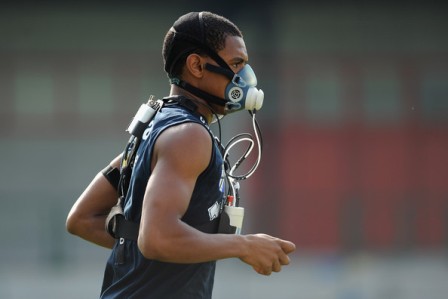 Under contract until June 2013, everyone likes former Under 23 National Team skipper, Obiorah Nwankwo.

According to new information available to allnigeriasoccer.com, not only Toulouse are interested in Nwankwo, there is also rival interest from Italian club Cesena for the signature of Nwankwo who is co-owned by Parma and Inter Milan.

With Cesena's relegation to the Serie B at the end of the 2011 - 2012 season, the management of the club see Nwankwo as a player who can be important in their quest for an immediate return to Italy's elite series.

The problem with the interest from Toulouse and Cesena is that Inter Milan are also interested in prolonging Nwankwo's stay at  The Black and Blues.

There is talk of a two-year contract offer from the Inter Milan hierarchy. The club hopes to conclude negotiations with the Nigerian and his entourage in the coming days.

''Cesena are also in the running to take him. Obiora has not renewed his contract yet. The meeting last month to discuss a two-year extension did not hold again because at the last minute the Inter people had to travel to England for a tournament in which the the Inter youth team was in the final.

''They won and with Andrea Stramaccioni..., the coach who took them to victory taking over the senior team  few days later, the Obiora Nwankwo contract talks was put on hold till the end of the season. We are hoping that the talks will take place next
week, but now discussions may be for a permanent transfer with the interest of Toulouse and Cesena,'' one of Obiora's representatives told allnigeriasoccer.com.

Nwankwo, a defensive midfielder, netted twice in 18 starts for Gubbio in the Serie B. Because of his resale value, allnigeriasoccer.com values Nwankwo at three million euros for suitors interested in his services.