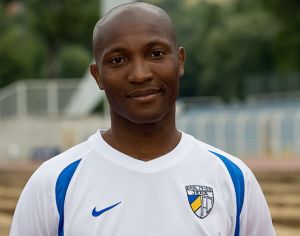 New  SV Wacker Burghausen gaffer Georgi Donkov is desperate to hand the experienced Nigerian defender Darlington Omodiagbe a new contract. However, there is no response from Omodiagbe, who is presently vacationing in Dominican Republic.

Omodiagbe was frozen out of the first team in the second half of last season. As a result, he is seeking first team football elsewhere this coming season. Again, age is not on his side. The 33-year-old former Under 23 ace has ambitions of continuing his career in Asia for probably his last big pay day.

''I am presently in Dominican Republic holidaying. Yes, I can confirm to you Wacker want me to extend my contract which has expired. They are offering me a two-year contract, but I need better conditions before I accept their offer......or I leave or quit the club.

''There are very lucrative offers for me in Asia which I am evaluating. Soon I shall make a decision on my future destination,'' Omodiagbe told allnigeriasoccer.com.

It would be Omodiagbe's 15th season in German football if he puts pen to paper on the new two-year contract proposed by SV Wacker Burghausen.