...the complete Nigerian football portal
Subscribe
GODFREY OBOABONA: I Hope To Give 120 Percent On Sunday
Published: May 29, 2012 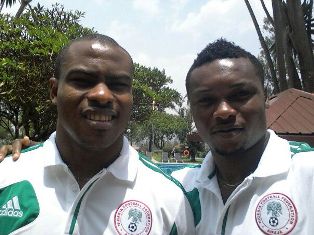 ''Personally, I am looking forward to this game. I want to thank God for being chosen as one of the players to represent the National Team. If I am considered for selection, I hope to give 120 percent to enable us get the three points on offer. The match against Peru was more than a friendly. It put us in good shape. I can't wait to be on the pitch on Sunday,'' says Oboabona to allnigeriasoccer.com.

Oboabona says there are no more minnows in African football, and has opined that the Eagles won't underrate their Namibian opponents.

He said: ''As far as the team is concerned, there are no more small countries again in African Football. We must respect them as a team. Namibia has a good squad.''

Meanwhile, in the absence of regular skipper Joseph Yobo, it has been announced by team officials that Lille's custodian, Vincent Enyeama will wear the skipper's armband against the Brave Warriors.