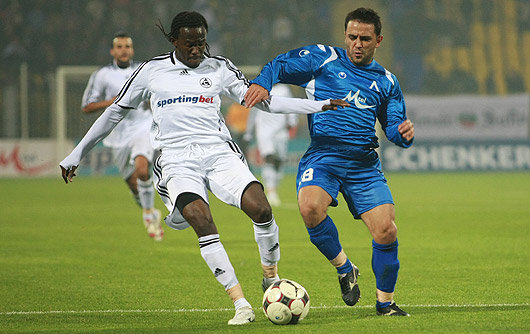 Olympic National Team invitee Victor Deniran will remain in Bulgaria next season, the 22-year-old has exclusively revealed to allnigeriasoccer.com.

Because of the strict foreign quota rule in Bulgaria's Premier League, in the 2011 - 2012 season, Deniran was loaned to Botev Vratsa. His loan spell was cut short after he suffered racism from the club's own supporters in a league match back in September. Slavia Slofia recalled Deniran from Botev and shipped him on loan to PFC Montana in the January transfer market.

''I am back to Slavia Sofia. I still have one more year left before the expiration of my current deal (June 2013, ed). But they want me to sign for an additional season. Nothing is signed yet. Now, I am considering the club's proposal,'' Deniran told allnigeriasoccer.com.

The left back has spent four seasons in Bulgaria, playing more than 60 games for Slavia, Sportist Svoge, Botev Vratsa and PFC Montana.