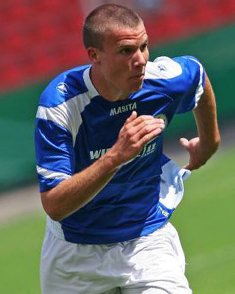 Namibia's golden boy and Hansa Rostock midfielder Manfred Starke has been ruled out of the Brave Warriors trip to Calabar, where they come head-to-head with the Super Eagles of Nigeria on June 3 in one of the qualifying fixtures for Brazil 2014 Fifa World Cup.

Respected Namibian journalist and Editor of namibiasport.com.na, Helge Schütz told allnigeriasoccer.com that Starke is unhappy that he will not be able to make the trip to Nigeria. Starke, who recently extended his contract with Hansa Rostock until June 2013, had been expected to make his Senior debut.

''Manfred Starke has been playing for Hansa Rostok, first for the juniors and this season he has played for their first team a few times.  He has played for Namibia U20 before in a tournament in Angola about 2 years ago, but has mostly been in Germany.

''He was called up for Namibia's World Cup squad now but got injured during training and is not in the squad anymore. He was very unhappy about the injury saying that he was looking forward to make his senior debut for the Brave Warriors,'' Helge Schütz told allnigeriasoccer.com.

The cheering news for the Brave Warriors is that Jerome Louis of Namibian champions Black Africa is recovering well from an ankle complaint, and should be in good physical condition before the team departs on Thursday for Nigeria.