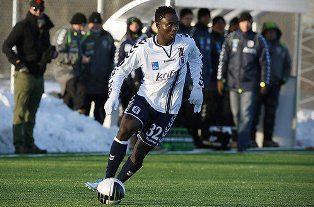 So far, the youngster has had two-days of training with the Superliga club.

Ogada has been with Moldovan club Olimpia Balti, which he has played 108 matches for, since 2008.

He has until July 11 to convince Coach Peter Sørensen of his qualities. If successful at trials, Ogada joins the Nigeria youth-teamer Edafe Egbedi at the five-time Danish Champions.