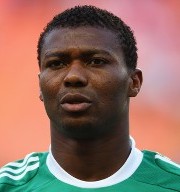 With a statement on the official website, Kasımpaşa have officially announced the arrival of South Africa 2010 World Cup star Kalu Uche. The ex Espanyol striker has signed a three-year deal with the newly promoted Turkish Super Lig club.

The transfer fee paid for the Nigeria international was not disclosed by Kasımpaşa. However, speculations in the media suggest a fee of 1.5 million euros was paid by the Turkish club.

Kalu Uche, 29, scored 6 goals in 15 appearances for Espanyol last term. He will join his new teammates at a training camp in the Netherlands as soon as possible.

UANL Tigres, Galatasaray and Bursaspor were reportedly in pursuit of Kalu Uche in the summer transfer market.