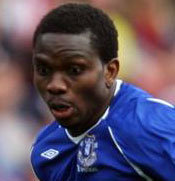 There is finally light at the end of the tunnel for Nigeria skipper Joseph Yobo. Everton and Fenerbahce have agreed a transfer fee of three million euros for the Super Eagle, according to Turkish newspaper Habertürk.

Both clubs had been negotiating a transfer fee for the central defender since the end of the 2011 - 2012 season. Yobo is expected to sign a two - year contract with the option for an additional season with the Yellow Canaries.

Ahead of the resumption of the new season, Fenerbahce are having a summer camp in Austria. All things being equal, Yobo will link up with the Istanbul based club when they return to Turkey.

Fenerbahce begin their quest to qualify for the UEFA Champions League proper with a game against FC Vaslui, Romania on July 31/August 1.