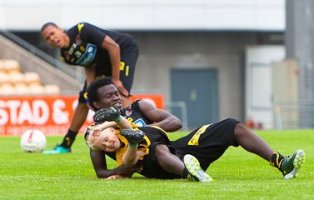 The Seville based club could lose midfielder Javier Magro Matilla in this window and want the ex Warri Wolves star as his replacement.

According to information from Israeli newspaper, Walla, an agreement in principle has been reached between Real Betis and Hapoel Tel Aviv for the transfer of Nosa Igiebor, who fancies a move to Spain.

Allnigeriasoccer.com has contacted Nosa Igiebor's agent, Atta Aneke but he refused to comment on his client's impending departure from the Reds.

Hapoel Tel Aviv will pocket 1.2 million euros as transfer fee for the sale of Nosa Igiebor to Real Betis. The 21-yearold midfielder will join the Andalusia based club in the coming days.