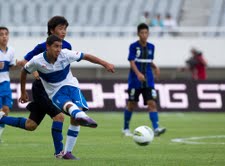 Universidad Catolica are the 2012 Manchester United Premier Cup Champions of the World after beating Gamba Osaka 2:1 in Shanghai on Wednesday.

The final match of the tournament which has involved over 8,000 teams from 40 countries reached its’ conclusion today at the Shanghai National Stadium, in a curtain raiser to the Shanghai Shenhua –v- Manchester United match.

An early goal from Gamba Osaka looked like being enough to hand them the title and the honour of being the first Asian team to lift the trophy - until Universidad equalised with less than ten minutes to go, the final goal scored in the dying minutes of the match.

Craig Cheek, VP of Nike Greater China was on hand, alongside Manchester United Legend Andrew Cole, to present the trophy and winners medals to Universidad and runners-up medals to Gamba Osaka.

“MUPC is a fantastic opportunity for football, Nike and Manchester United to join together and engage a wider audience across the world. This was a remarkable journey for the two young teams here tonight and a special experience they will remember for a long time.”

“I can’t believe we are the first team from Chile to win the World Title: This was unbelievable, completely amazing! I am so proud of my team. Turning a 1:0 deficit around against Gamba Osaka who were really strong opposition was not easy. My boys showed great heart, passion and courage – but not only tonight – throughout the whole competition.

“This has been a really big experience in their lives. Playing teams from all around the world is a joy, a dream come true for them. It has been a learning experience for the coaching staff too - hearing about different ways of doing things from some of the best youth development staff around.

"We have all learned so much and will remember this moment- and this whole tournament - for a very long time.”