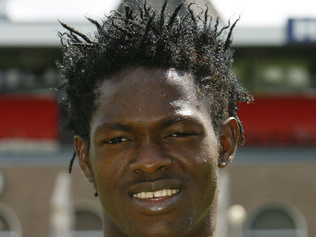 Super Eagles defender Ayodele Adeleye has not left SC Tavriya, spokesman of the Simferopol bsed club, Alexander Ryzhenko has been quoted as saying by football.ua.

There are speculations that the former Sparta Rotterdam ace could be leaving the Ukrainian Premier League club for a new adventure possibly outside Ukraine. Russian Premier League side FC Kuban Krasnodar reportedly lead the race to secure the services of the Beijing Olympics silver medalist.

On Tuesday, Adeleye joined the rest of his teammates in the workout which started at 11:00 am.

''The defender has an existing contract with the club until June 30, 2014. No formal proposals to move elsewhere have been reported. Now he, like the rest of the team is preparing for the match against Karpaty,'' Ryzhenko told football.ua.

Adeleye has made two appearances for Tavriya in the championship. The 23-year-old was an unused substitute in last weekend's fixture against Illichivets'(1-0).