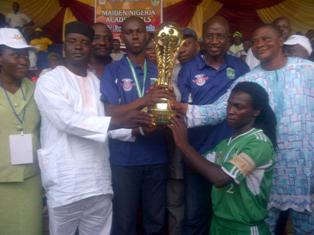 Nigerian ex-international, Waheed Akanni put up a surprise appearance at the NIS Field, National Stadium, Lagos on Saturday, as he stopped by to witness one of the matches in the semi-finals of this year’s Bishop Mike Okonkwo Football Championship, tagged TREM Cup 2012.

Although Akanni admitted in a chat with allnigeriasoccer.com that he had not been officially invited by the organizers, he declared that he would always love to watch young players exhibit their talent, hence his decision to grace the occasion.

The erstwhile chairman of Lagos Football Association eventually stayed all 120 minutes of the pulsating first semi-final, before sneaking out unannounced, as crowd favourites Divine Royals failed to take advantage of the odds staked in their favour, but eventually lost 3-2 on penalties to unfancied Holy FC.

Not even the presence of former Egypt and Ghana based Femi Olayanju and skipper of the side, Chidi Chukwuka (Birchman) – who has seen action in Austria, Denmark and Portugal, but currently plays for Nationwide League side, Union Bank FC of Lagos – could save the day for Divine Royals.

The defeat means Mr Oscar Ezinwa Emmanuel and his boys will have to settle for a third-place shot at the grand finale of the competition on September 1 at Yaba College of Technology, Lagos.