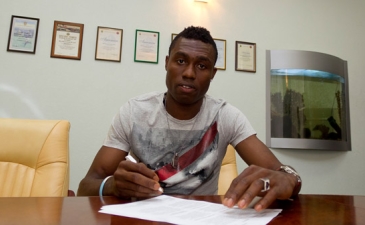 Former Super Eagles invitee, Michael Chukwunwike Odibe (Asaba) has declared that he aims to make the best of his debut season with his new club in Ukraine, Dnipro Dnipropetrovsk, as he seeks to put an to a recent string of ill-fortune.

From a height of his international debut for Nigeria in the friendly against Sierra Leone at Teslim Balogun Stadium, Lagos, Odibe has since fallen into the penumbra of top flight football, as his loan spell at Siena of Italy eventually ended unceremoniously.

The former First Bank FC of Lagos and Sharks of Port Harcourt central defender looked to have gained the expected breakthrough for his career in 2010, when he left Racing Union Saint-Gilloise of Belgium to join Siena in the Serie A, but soon had to take another loan spell in the third tier league of The Land of The Azurri.

That spell at Südtirol ended after just eleven games and a goal for the side, before Odibe was again on the move, as he headed out to the Ukrainian Premier League (UPL) to join Arsenal Kiev, where he spent the better part of last season.

However, Odibe has since left the Kiev-based side and is now aiming at picking up the pieces of his career at Dnipro, where he says the start of the season has been splendid so far and, after the first five matches of the campaign, ‘Asaba’ is smiling with glee once again.

“I am happy that things are looking good already for me and the club,” Odibe stated in a chat with allnigeriasoccer.com at the weekend. “The club is doing well and I believe that I am capable of achieving my best season ever as a professional footballer with them.”