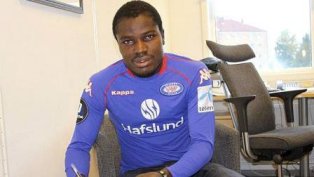 Coach of Nigeria's National Team Stepehen Keshi will be without the services of Vålerenga's combative midfielder Fegor Ogude for the Super Eagles African Cup of Nations qualifier against the Lone Stars of Liberia in Monrovia on September 8.

Note that Ogude has been out of action since July 11 when he had to be substituted less than 10 minutes into the game against Odd Grenland after breaking his foot.

'' I am not quite sure how long Ogude would be out of action, probably the next four weeks I guess. Thus, I am not sure he might recover in time for Nigeria's game against Liberia,'' says Ogude's agent, Atta Aneke to allnigeriasoccer.com.

Formerly with Warri Wolves in Nigeria's top division, Ogude had been expected to leave Norway for one of the glamor leagues in Western Europe after a brilliant 2011 campaign, where he netted 6 goals in 25 starts for VIF.

'' A few clubs in Holland and Belgium showed interest and even sent scouts to monitor his performances in Norway. Unfortunately he got injured about a month ago.No club made an official offer yet,'' says Aneke.

Fegor Ogude had made 8 appearances in the Norwegian championship prior to his injury setback.