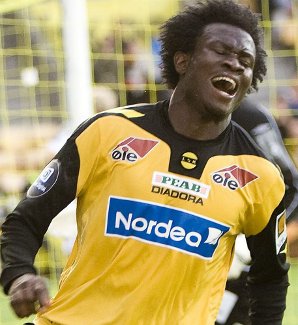 According to Spain's most respected sports daily Marca, negotiations between Real Betis and Nosa Igiebor's entourage have stalled. But the Olympic National Team star could still realize his dreams of playing in unarguably the best championship in the world.

Getafe, which once paraded Ikechukwu Uche in its ranks, is the latest club linked with Nosa Igiebor. The report from Spain added that the Madrid based club is prepared to wait until June 2013 to bring the 21 - year - old midfielder to the Alfonso Pérez Stadium.

Real Betis had reached an agreement with Hapoel Tel Aviv for Igiebor. However, the representatives of the former Warri Wolves ace deemed insufficient the wages proposed by the Betis hierarchy.

Three - time State Cup winners on the bounce, Hapoel are participating in this season's Europa League, and face Luxembourg club F91 Dudelange in the play-offs of the competition.

Coach Nitzan Shirazi wants to retain the services of Nosa Igiebor until August 29 to assist The Reds qualify for the group stage of the Europa League.