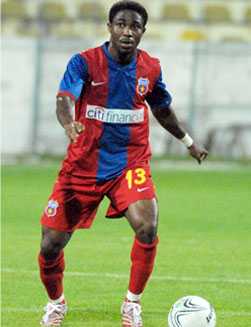 Despite the current summer transfer window fast approaching its end, former Steaua Bucharest of Romania defender, Ifeanyi Emeghara (Fifty) has declared that he is not in a hurry to get a new club for the 2012/2013 season.

Emeghara, who has also starred for FC Ebedei of Shagamu, Partizan Belgrade of Serbia and Timisoara of Romania, has been clubless since the end of 2011, when his contract with Steaua ran out, but the ex-Super Eagles invitee told allnigeriasocer.com that he is biding his time in order not to make a wrong move.

“It’s true that many of my friends and fans are getting worried over my present situation,” admitted Emeghara, who suffered a career-wreaking injury during training with the Eagles at Ghana 2008 Africa Cup of Nations.

“I could have taken one of the many offers that some agents have already brought to me, but I want to see what God has in store for, instead of rushing into what I don’t know.”

The fair-skinned Imo State-born utility player has been troubled with injury ever since the Ghana 2008 setback, to the extent that he had to spend several months on the sideline and took surgery in Bologna, Italy before another short-lived return to action with Steaua at the start of last year.

“There is no need for me to worry about anything any longer. God knows what plans he has for me and I will just take where he will direct me according to his grace,” concluded Emeghara, who is not related to the Nigerian-born Switzerland international who shares the same names with him.