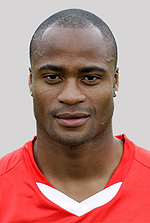 One-cap Nigeria international Ugochukwu Ukah has signed a two -year contract with Jagiellonia Bialystok, the Polish club announced on Monday. There is an option to extend the deal for an additional season.

Ukah had been courted by teams in Germany, Israel, England and Poland in the summer market. The center-back tested with championship side Crystal Palace last week, but nothing came out of the trials.

Widzew ├ģüód├ģ┬║ was Ukah's last club in Poland. At the end of last season, the player ended his collaboration with the Lodz based club over unpaid wages.

From Tuesday, Ukah will start training with his new teammates, and if he proves his fitness could be selected by coach Tomasz Hajto for Jagiellonia Bialystok's first game in the championship against Podbeskidzie Bielsko Biala.