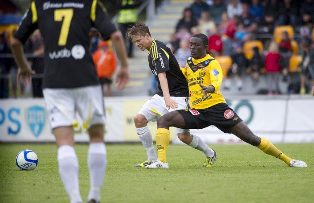 Mjällby's Nigerian central defender Gbenga Arokoyo on the back of his imperious displays for the reserve team has been promoted to the first team squad by coach Peter Swärdh.

Arokoyo, who cut his footballing teeth with the famous Kwara State Football Academy, is delighted with the progress he has made since his arrival in Swedish Football six months ago.

'' God made it possible. I have always had the belief in my abilities. Even when I was not playing for the first team, I kept my focus on my goals and refused to give up. I also want to thank my coaches in Nigeria that have helped me reach this stage, especially coach Kadiri Ikhana,'' says Arokoyo to allnigeriasoccer.com.

He added: '' It has been a wonderful experience for me. I have been on top of my game and consistent since I joined the first team. Hopefully, I should play my fourth game this weekend against östersunds FK.''

Still a teenager, Gbenga Arokoyo is under contract with Mjällby until the end of the 2015 season.