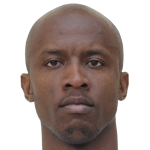 According to fotball.aftenposten.no, the clash of heads led to both players lying on the pitch, but the Nigerian was worse off.

An ambulance was called by the medical staff of  Sandnes Ulf when it was feared Okoli has broken his skull. And after Okoli was examined, he was taken to the hospital for proper medical attention.

When Sandnes Ulf play Sogndal on Sunday, it is unclear if Okoli would be available for the match.