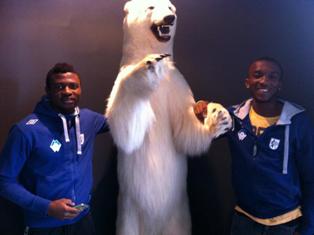 First division  Hodd FC are through to the semi-finals of the Norwegian Cup after a nail-biting shoot-out win (5-4) over Haugesund on Saturday. It was 2-2 after regulation time so the game had to be decided with the lottery of penalty kicks.

Lala, who joined Hodd in the winter from local club Enyimba, says he is looking forward to the semi-final, an opportunity for the Ulsteinvik based club to win a trophy in what has been a disappointing season so far.

''I am confident Hodd can go beyond the semi-final. Nobody gave us a chance to do well in this competition, but we have silenced our critics with our good run. This is a cup competition and once you get to this stage, with a little bit of luck anything can happen.

''I have never won a cup competition in my career. The closest I came was winning a bronze medal with Enugu Rangers in the FA Cup. Definitely, this will be the highlight of my professional football career if Hodd wins the trophy and qualify for the Europa League,'' says Lala to allnigeriasoccer.com.

Nonso Lala has netted twice in 12 games in the Norwegian first division. The 21 - year - old is under contract with IL Hødd until the end of the season.