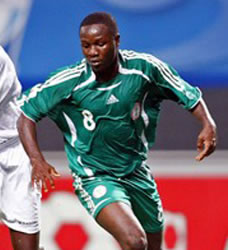 After an agreement was reached by both clubs, former schoolboy international Kabiru Akinsola will play for Racing de Santander on loan until June 30, 2013.

Akinsola, born January 21, 1991, started his career in Spain with UD Salamanca. After two years he moved to Zamora, then later to Granada, who loaned him to Cadiz last season.

Apart from Spanish and Greek interest in the summer transfer market, the world champion at Under 17 level with the Golden Eaglets back in 2007 was also on the wishlist of clubs in Russia.

Kabiru Akinsola trained for the first time with his new teammates on Thursday under the guidance of coach Fabriciano González.