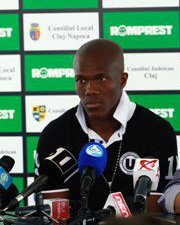 Romania based player Tony Nwakaeme will arrive Ukraine in the coming days to have discussions with Premier League team FC Zorya Luhansk with a view of signing a contract.

Nwakaeme snubbed offers from France, Italy and Germany this summer, preferring to remain in Romania . He signed a two - year deal with Petrolul Ploiesti on the advice of the former President of Universitatea Cluj who left the club and moved to Petrolul Ploiesti

The 23 - year - old highly rated forward is expected to undergo a medical soon, and if successful he would be offered a contract.