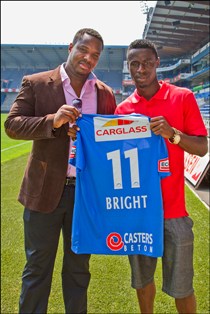 Recall that Bright Osagie had signed a pre- contract with Racing Genk in June. But the agreement was later terminated after Westerlo failed to reach an agreement with Genk on a permanent transfer.

''I am presently with Bright Osagie in Belgium. Soon we travel to Nigeria to process his work permit. He is a big talent and many clubs in Europe were jostling for his signature before he settled for Red Bull. It's a very good choice for him because I think he can even develop further here,'' Klay Ekeocha told allnigerasoccer.com in a telephone conversation.

The Bulls have confirmed the arrival of the young Nigerian forward in a statement published on the club's official website.

Sporting Director of Red Bull Salzburg , Ralf Rangnick says the signing of Bright Osagie is an investment for the future.

''Bright Edomwonyi is a lightning-quick, technically accomplished and threatening attacking all-rounder. He is a huge talent at just 18 years old and fits our requirements perfectly,'' said Rangnick.