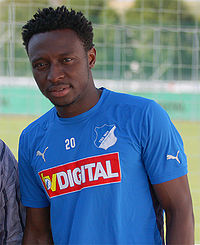 Super Eagles and Schalke 04 of Germany striker Chinedu Obasi is confident that his side will come out of their UEFA Champions League Group B unscathed, despite being grouped with Arsenal, Olympiakos and Montpellier.

Speaking immediately after the draws where held, the former Hoffenheim striker stated that the group was open, but that he was sure his team had the pedigree to emerge as one of the two qualifiers from the group at the end of the qualifiers.

"I do not believe that any team are favorites in this group. All four teams in the group are champions in their own rights. However, I am confident that Schalke 04 has all it takes to qualify from the group. We have developed into a very strong unit and our technical bench is also very good and so we shall do every thing possible to qualify from the group and hopefully go all the way in the competition.

''On my own part I look forward to contributing as much as I can to ensure that we qualify. It would be a pleasure playing against Arsenal in London because I have many friends and family there, some of whom support Arsenal but I am sure on that day they will show me love and if I get a chance to play I will do my best,'' Obasi told allnigerasoccer.com.

Speaking on fan's clamour for him to move to the EPL so that they can watch him week in week out, he dismissed such talk, saying that he had a contract with Schalke which he will respect, and that he is happy in Schalke and Germany.

"England is a lovely place and  the EPL is strong. My good friend Demba Ba is doing well there and I'm happy for him. For now, I am a Schalke player and I am very happy here.''