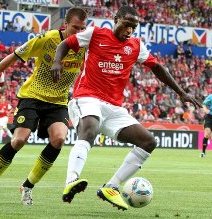 Former Cologne player and retired Nigeria international Sunday Oliseh has commented on the recent form of compatriot Anthony Ujah to the Press in Germany.

Ujah has notched two goals in two consecutive games in Germany's second - tier. Truly, the former Lillestrom golden boy, who failed to prove his credentials at Mainz, is back in the spotlight.

''I see Tony like to play! He is always hungry and has full commitment there. The change from Mainz to Cologne is a good thing for the boy, " Oliseh told express.de.

Adds Oliseh: ''Ujah's playing style is a mix of Emmanuel Amunike and Victor Ikpeba. It is a matter of time before he gets his chance in the National Team. I have been following his situation at FC and was very sad that the descent happened. But recent performances were better and Ujah gives me hope. "