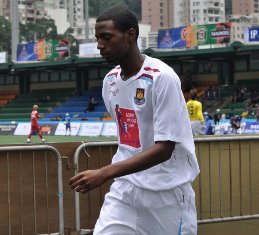 The 21 - year -old midfielder, dubbed the 'New Yussuf Ayila' signed a one - year contract with the North London club in September.

''I have signed for Enfield Town for the time being. I am hoping to move up the leagues from there. They've really taken a liking to me and have given me an opportunity to start enjoying my football again,'' says Okus to allnigeriasoccer.com.