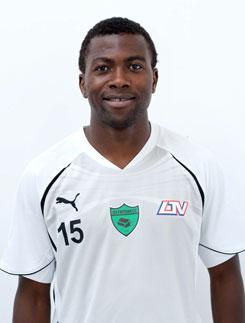 Former Portugal-based striker, Philip Chidi Onyemah is back banging goals one by the dozen for Olympiakos Nicosia of Cyprus, just few months after he almost quit the cash-strapped outfit.
.
Incidentally, Super Eagles 2010 World Cup star, Sanni Kaita recently joined the capital club, but it is Onyemah that is still hogging headlines, as has been a regular feature for his team this season.

Onyemah is currently the second highest scorer in the team, having scored twice in their last five meetings and was largely instrumental in seeing Nicosia win two of their last five league matches in Cyprus top division, while also losing one and drawing two.

The last of these was a goalless draw at home against AEL Limassol on Monday, October 8; but Oyemah has scored a total of 19 goals in 67 appearances for OL since joining them in 2010.

The 2001 Golden Eaglets invitee has also played for Fornos De Algodres, FC Farmalicao and Rio Ave of Portugal, but initial efforts at taking his trade to Landskrona of Sweden and Timisoara of Romania fell flat at the last minute of transfer talks.