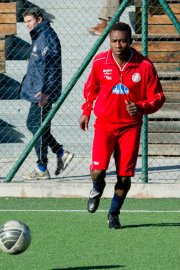 One - cap Nigeria international Michael Odibe since he made his international debut two winters ago against Sierra Leone has been ignored by the National Team selectors.

Now, the FC Dnipro Dnipropetrovsk defender is hoping that his displays for his Ukrainian team would attract the attention of coach Stephen Keshi.

National Mirror quoted the 24 - year -old as saying: ''I believe I have done well enough to be considered for an invite and I will have to just wait and see how things go.

''The players in the national team now are my friends and I will only wish them well because I will always give them the best moral support I can offer.

''We talk on phone too and I can’t just wait to be part of the team. Coach Stephen Keshi is a coach I respect so much and he knows his onions.''

Odibe has suited 7 times for Dnipro in the Ukrainian Premier League. His only booking so far this campaign was a month ago against Chornomorets .