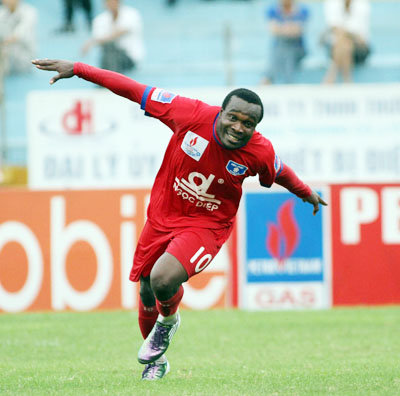 He ended the season with 17 goals in 26 matches for capital club Hanoi FC to become the top scorer in the V - League . However, the Nigerian striker Timothy Anjembe was not very popular with his teammates.

According to reports, his past teammates failed to congratulate him when it was announced earlier in the year at a meeting that he had extended his stay with Hanoi FC.

Anjembe was not the skipper of the team, but he took it upon himself to pass instructions to his colleagues on the pitch! Apparently, this did not go down well with his colleagues.

They labelled the Nigerian a selfish player. His discipline on the pitch was also questionable. In the 2011 season, he was red-carded in four matches in the Super League, which earned him a suspension for eight games.

Allnigeriasoccer.com can exclusively reveal that Anjembe has sensationally departed Hanoi FC for rivals Vissai Ninh Binh. The 25 - year -old had extended his contract with Hanoi FC for an additional two seasons back in April. The deal would have seen him remain at the club until August 19, 2015.

''I am not remaining with Hanoi, I have moved. The economy in Vietnam is in shambles, so I just signed a one - year contract with Vissai Ninh Binh on Monday, maybe I extend later. The club is based in the Northern Province,'' Anjembe told allnigeriasoccer.com.

Anjembe, former top scorer in the domestic championship, did not disclose the financial details of his new deal. According to leaks gathered by our Editorial Staff, the ex Lobi Star will earn $120, 000 (=N= 18 million) in his one - year deal with Vissai Ninh Binh FC.