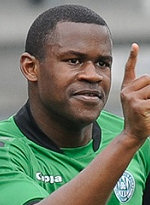 ''He is with us and training and yesterday (Tuesday, ed) he played with the U21 team. Because he is a central defender, it is doubtful if there will be something, given that we are well positioned there, ''says sports director Gustaf Grauers to fotbollskanalen.se.

According to reports, New York Red Bulls terminated Ogunbiyi's contract in August after it was discovered during a routine medical that he had a heart defect.